Heat transfer Thermodynamics is a discipline of thermal engineering concerned with the generation, use, conversion, and exchange of thermal energy (heat) between physical systems. Heat transfer is classified into different mechanisms such as thermal conduction, thermal convection, thermal radiation, and energy transfer through phase changes. Engineers also consider the mass transfer of different chemical species, cold or hot, to achieve heat transfer. While these mechanisms have distinct characteristics, they often occur simultaneously in the same system.

Heat conduction, also called diffusion, is the microscopic direct exchange of kinetic energy of particles at the boundary between two systems. When an object is at a different temperature from another body or its surroundings, heat flows so that the body and surroundings reach the same temperature, at which point they are in thermal equilibrium. Such spontaneous heat transfer always occurs from a region of high temperature to another region of lower temperature, as described by the second law of thermodynamics. 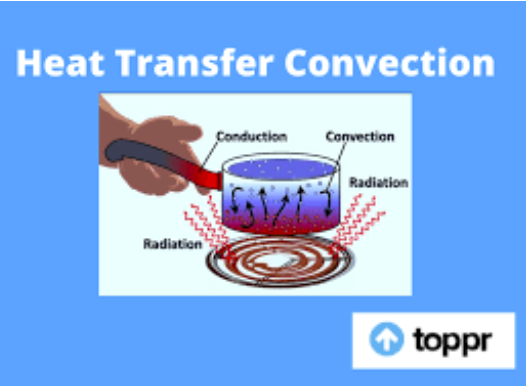 Heat convection occurs when the mass flow of a fluid (gas or liquid) carries heat along with the flow of matter in the fluid. Fluid flow can be forced by external processes or sometimes (in gravitational fields) by buoyancy forces caused when thermal energy expands the fluid (for example in the case of turbulence in a fire), thus influencing its own transfer. The latter process is often called “natural convection”. All convective processes also transfer heat partly by diffusion. Another form of convection is forced convection. In this case, the fluid is forced to flow through the use of a pump, fan, or other mechanical means.

Thermal radiation occurs in a vacuum or through any transparent medium (solid or fluid). It is the transfer of energy by means of photons into electromagnetic waves governed by the same laws.

Heat transfer is a process function (or path function) as opposed to state functions; therefore, the amount of heat transferred in a thermodynamic process that changes the state of a system depends on how that process occurs, not just the net difference between the initial and final states of the process.

In an engineering context, the term heat is considered synonymous with thermal energy. This usage has its origins in the historical interpretation of heat as a fluid (caloric) that can be transferred by various causes, and which is also common in layman’s language and everyday life.

The transport equations for thermal energy (Fourier’s law), mechanical momentum (Newton’s law for fluids), and mass transfer (Fick’s laws of diffusion) are similar, and analogies between these three transport processes have been developed to facilitate the prediction of conversion from any to the others.

Thermal engineering is concerned with the generation, use, conversion, and exchange of heat transfer. As such, heat transfer is involved in almost all sectors of the economy.

Advection is the transport mechanism of a fluid from one location to another and is dependent on the motion and momentum of that fluid.

The Energy transfer between objects in physical contact. Thermal conductivity is the property of a material to conduct heat and is evaluated primarily in terms of Fourier’s Law of heat conduction.

Transfer of energy between an object and its environment due to fluid motion. The average temperature is a reference for evaluating properties related to convective heat transfer.

In matter transfer, energy—including thermal energy—is moved by the physical transfer of a hot or cold object from one place to another.[7] This can be as simple as placing warm water in a bottle and warming a bed or moving an iceberg in changing ocean currents. A practical example is a thermal hydraulics.[citation needed] This can be described by the formula:

Energy transfer through the emission of electromagnetic radiation

The overall heat transfer depends on the geometry of the system and the different thermal resistance.

This is an unsteady state heat transfer. The overall heat transfer coefficient can be formulated as how heat is better exchanged through thermal resistance. There are three (3) ways as below.

Conduction is one of the most common forms of heat exchange, which occurs through physical contact. An example of heat exchange by conduction is the metal handle of a pot. After a while, the thermal energy from the flame migrates to the bowl and then through the handle, which at some point becomes too hot to touch with bare hands. Metals are generally good conductors of heat, but not every material is. For example glass, wood, and air are poor heat conductors and are known as heat insulators. Empirically, materials that conduct heat well also conduct electricity well. The same concept applies to electrical insulators.

Convection is the phenomenon of heat transfer through a fluid – liquid or gas – due to the thermodynamic mixing between warmer molecules, which rise, and cooler molecules, which descend. Convection occurs when there is a temperature difference between two areas of a liquid or gas. For example, when you heat water in a vessel, the warmer water, which is even less dense, rises to the surface of the vessel, while the cooler water, which is denser, sinks to the bottom. Thus a natural water circuit is formed in the vessel. Steam boilers work on this principle.