A Nucleus is the most integral part of the Cell. The Nucleus is the organelle that consists of chromosomes. All cells don’t have a nucleus. The nucleus is also used in another field of study. 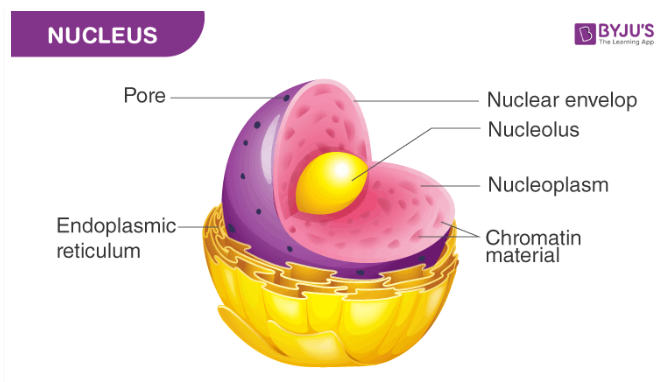 In other scientific fields, the nucleus is used as the central part among the surrounding things. In Chemistry, the nucleus is the Centre of the atom containing neutron and proton. In Chemistry, the Nucleus is the arrangement of atoms in the compounds due to the substitution of atoms without a change in structure. In Astronomy, Nucleus is the center of the head of the comet or the central part of the Galaxy. In Metrology, a Nucleus is a particle on which the water is accumulated in the free air to form the ice crystals.

A Nucleus is consisting of several substructures and complex nuclear structures. The Nucleus possesses the double lipid bilayer which serves to separate the nuclear material from the cytoplasm. This membrane is continuous with the rough endoplasmic reticulum. Since the membrane is impermeable to most molecules, traffic between the nucleus and cytoplasm is mediated through the nuclear pores. These pores selectively enable the molecules to pass through the membrane.

Deeper in the nucleus is the DNA, which often occurs as interphase chromosomes. As a very long molecule (~2 meters for mammals), DNA has to be packed to a large extent to fit into the small space of the nucleus. This happens through an energy-dependent process that involves many proteins and eventually results in a structure called chromatin.

The main core functions of the Nucleus are:

In addition to the nucleus, other components include nuclear chromatin (chromosomes), nuclear bodies polymorphic mixed karyosomal association (PIKA) domains, promyelocytic leukocyte protein (PML) bodies, granules, etc. parasitic nuclei, in turn, proteins, . DNA and RNA. Although the nucleus is involved in regulating gene activities, the nucleus is also responsible for the synthesis of ribosomes, which are essential for protein synthesis.

In higher eukaryotes, the nucleus contains five centers where phosphorylated DNA transport and rRNA processing proteins components are associated with and protein cores of ribosome biogenesis.

Q: What is the nucleus?

Ans: The nucleus is a double membrane organelle that contains genes and other instructions necessary for cell processes. It is only found in eukaryotic cells and is one of the largest organelles.

Q: Describe the general structure of the nucleus?

Ans: There are two membrane organelles, the nuclear membrane/sheath that surrounds the nucleus.

The nucleolus is located in the nucleus and contains 25% of its volume.

A dense thread-like structure known as chromatin is found in the nucleus, which contains proteins and DNA.

The mechanical strength of the nucleus is provided by the nuclear matrix, a network of fibers and fibers that act as the cytoskeleton.